On June 10, 2020, the Peralta Community College District (PCCD) Department of Marketing, Communication and Public Relations (MCPR) received recognition from the Community College Public Relations Organization (CCPRO) as part of the 2020 CCPRO Awards Ceremony. The District earned Third Place in the highly competitive Social Media Marketing category. We received the award for "Become a Champion" - a Twitter post by Faiza Ali that included a 17 second video produced by AC Hunter that was then "boosted" by Mark Johnson to maximize the audience reach for the video here in the Bay Area. It was a real team effort! Click the photo below to visit the Tweet and watch the video.

The "Become a Champion" tweet is important for Peralta for a few reasons.

First, it represents one of the MCPR department's first attempts to create short video content expressly for Twitter, in the form of a 17 second video produced by Angel Hunter of the Peralta TV staff.  The video is called “Become a Champion” and promotes enrollment at all four Peralta District colleges, with slightly more screen time going to Laney College football players as the 2018 California state champions.

This is also the first tweet that we (the District marketing department) have ever boosted via Twitter paid reach, which was extraordinarily successful.  As of January 7 2020, when we entered the CCPRO Awards contest, we had spent $307 for 63,928 impressions, which has doubled the visibility of this video (from 61K organic impressions to 125K total impressions) and exponentially increased the media views (people who watch the video) from 284 organic to 16,452 total video views. The boosting also increased engagement, from 57 organic to 540 total engagements.

Below is a screen shot of the "Tweet Analytics" final results of the boosting campaign, which ran to the end of January 2020. "Become a Champion" received nearly 200,000 impressions, 28,600 video viewings, and 910 "engagements" which means comments, likes, retweets, and clicks to the Peralta website for enrollment information. 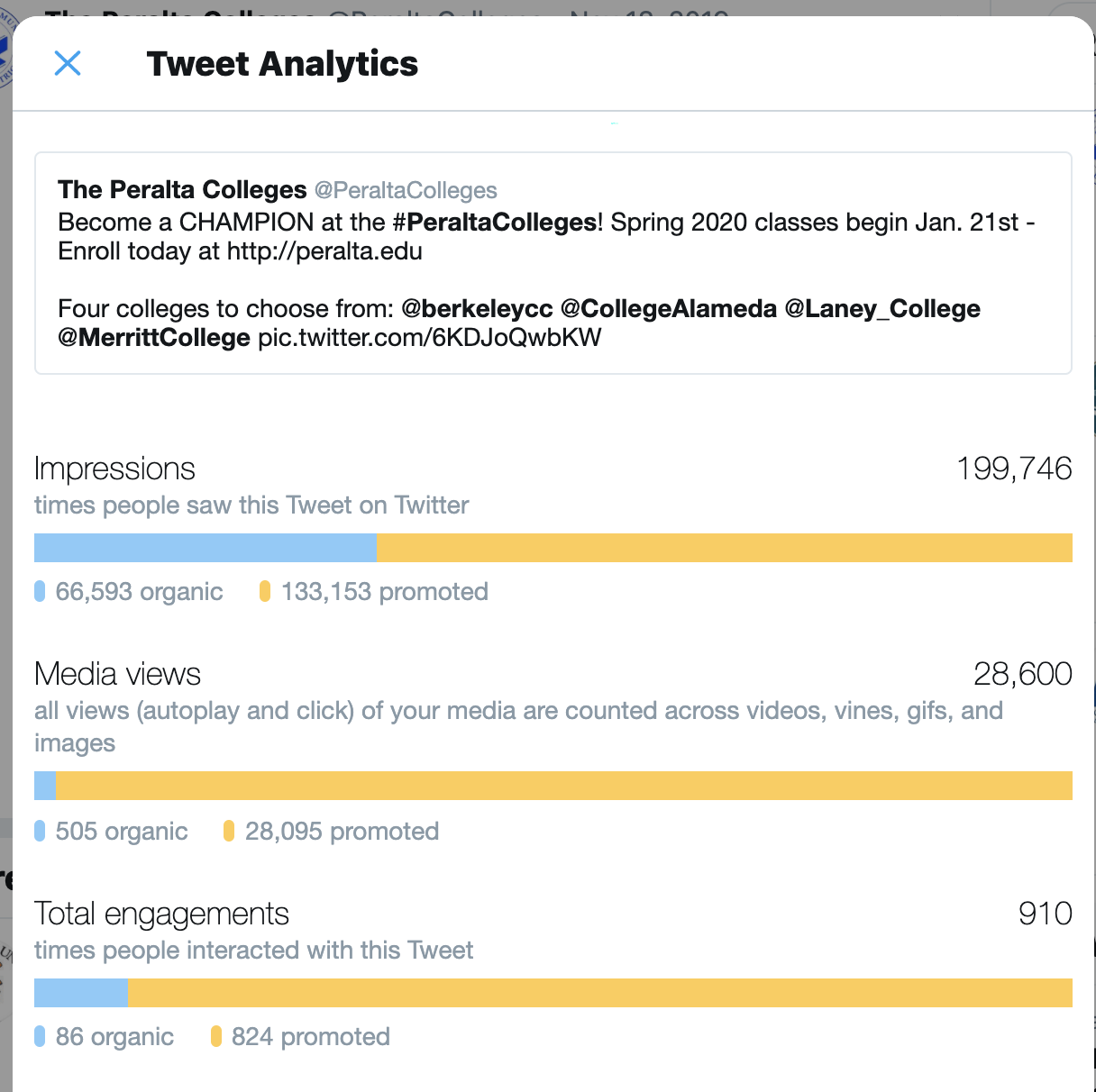 We learned that video works to garner attention, boosting works to grow audience reach, and boosting video content works extraordinarily well to generate engagement with our broader community.  We also learned that while boosting is effective, the geographic area offered by Twitter Ads is not nearly as granular as geo-targeting options with other social media ad options. Our Fall 2020 enrollment campaign is in progress putting these learned lessons to good use. If you have questions, please contact Mark Johnson at markjohnson@peralta.edu.