Due to the continuing Alameda County directive to shelter in place, the Peralta Community College District Board of Trustees met via Zoom on June 23, 2020. This meeting was epic. Clocking in at 5 hours and 40 minutes or so, the meeting included a landmark vote on the District's relationship with Alameda County Sheriff's Office (ACSO) which helped draw 100 speakers for the public comment section of the meeting. Additionally, this meeting was the last for Dr. Tammeil Gilkerson, Laney College President, and Dr. Timothy Karas, College of Alameda President. The full video recording of the meeting is available on the Peralta YouTube channel here.

The discussion about campus security and the ACSO contract was moved up in the agenda for consideration right after the Public Comment agenda item. Most of the one hundred pubic comments were made in regards to campus security (it is important to note that there were many comments also made thanking Dr. Gilkerson and Dr. Karas for their service as college presidents).  In order to accomodate the one hundred speakers, the usual 3 minute per speaker time allotment was reduced to 1 minute per speaker.  Still, even with that change, the meeting featured nearly two hours of public comment. Community voices were heard! Following the comments and a lengthy discussion, the Trustees voted unanimously to extend the current agreement with Alameda County Sheriff's Office to the end of 2020 while moving forward with a combination of private security, student security, and community-based security model. 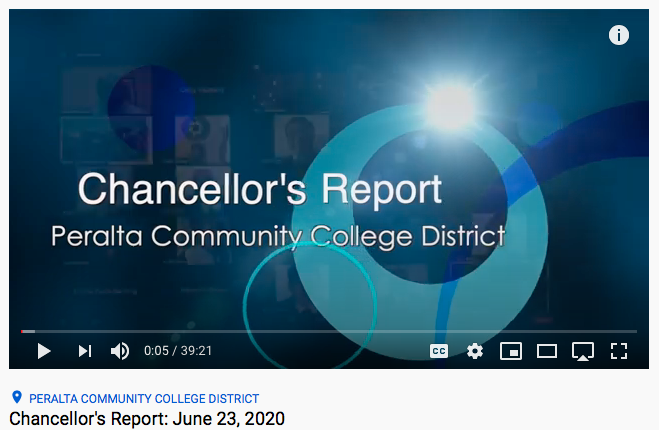